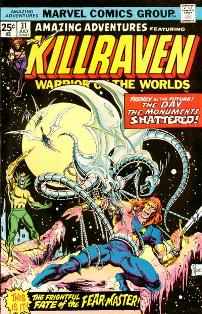 After being tested with various tryouts, Marvel finally gave Don McGregor his 1st series to script – Jungle Action featuring the Black Panther. No one really expected anything from this but the “kids” kinda dug it. Hey, we have another series that is floundering – Amazing Adventures featuring Killraven. Let’s throw it to McGregor, he might do something with it.

And he did – he took a character that followed the premise of an Martian invasion in 2018 ,which came in a fanfare of Neal Adams artwork (who only completed 8-9 pages) - Amazing Adventures 18 - and the promise of something new and over 3 issues with 3 different writers and 3 different artwork teams, it kinda drifted along and kinda sucked – he kicked the fuck out of it and gave us a vision of the future with experimental plot lines, depth of character, a strong female cast, political overtones and to my hero-worshiping eyes, a real psychedelic feel that still resonates with me now.

After a couple of Gene Colan fill ins, the final part fell into place – P. Craig Russell came aboard and brought his almost art nouveau style into play with an unearthly vision of an apocalyptic world filled with strange visions, unimaginable hardships and mutated beings side by side with landscapes of beauty and peace. 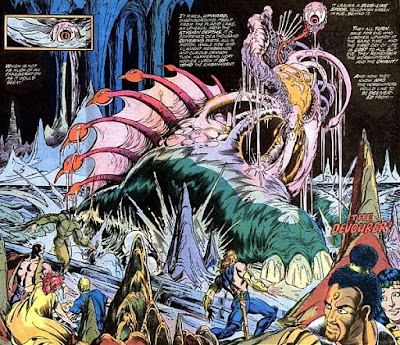 A young Killraven escaped the gladiator pens set up for the amusement of the Martian invaders and with a band of misfits, set themselves up as “Freemen”, dedicated to overthrowing their hated masters. McGregor used his stories to examine an America undergoing a crisis of identity and disillusion with current political leaders, an America which in 1975 was starting to be a consumerist society and where the word individual was frowned upon.

As it is very late and my deadline for getting this to Lucas is steadily looming, I am not going to deliver a blow by blow issue review leading up to Issue 31, even though you will not know what is going on, just believe me when I say that this saga of a dystopian tomorrow is one my highlights of my comic collection.

Amazing Adventures 31 features the end of the Death Breeders saga. Martian breeding pens are filled with couples whose only duty was to provide their new-born children as delectable titbits. Killraven and his band of misfits blew up the warren of misery and rescued a couple – Adam and Eve – so their child could be born free. A running battle ensued but took second place to McGregor’s commentary on the human fascination with paradise, consumerism, racism, love and the hero as a flawed character whose self belief overcomes his many doubts about what he is doing.

Look, I plainly cannot do this series justice – just track these comics down in the black and white collection and enjoy some thought provoking story telling. - Tony Maim 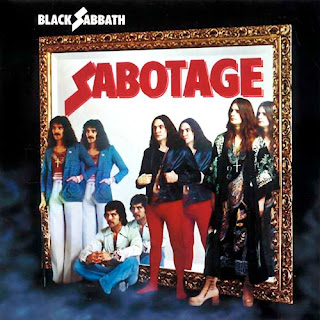 BLACK SABBATH
'Sabotage'
No surprise that we'd feature Sabbath's sixth album here. "Hole in the Sky", "Symptom of the Universe", "Thrill of it All" & "Am I Going Insane (Radio)" can all be found here. What can you even say about any of the first six Sabbath albums? These albums, of which 'Sabotage' was the last are as close to perfection as popular music ever got. "Hole in the Sky" is often imitated, "Symptom of the Universe" laid the foundation for early thrash metal, even the title of the instrumental "Supertzar" has been lifted and used as the name of a very good band out of Finland (their excellent 'Funeral Blues' EP is available for Free Download at this location).

Sabbath recorded this album in a haze of litigation and courtroom battles, to the members of the band the 'Sabotage' era is a blur, the album nothing special. Guitarist Tony Iommi once met a big fan who told him that 'Sabotage' was his favorite album. Iommi's response was, "Really? Why?" 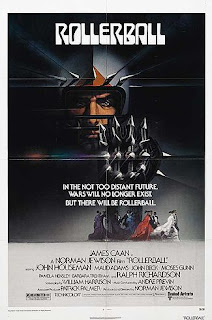 Forget the 2002 re-make with LL Cool J, the original Roller Ball is a gritty, unflinching sci-fi picture with a hardcore anti-authoritarian, anti-corporate slant. The world of Roller Ball depicts a future in which major corporations have won all. Nations and wars are things of the past ... as are prosperity and purpose. In their place is the deadly game of Roller Ball, a nod to the Roman gladiator matches which similarly dominated a conquered, listless world. This is such a great film, I can't recommend it enough. Watch it here.