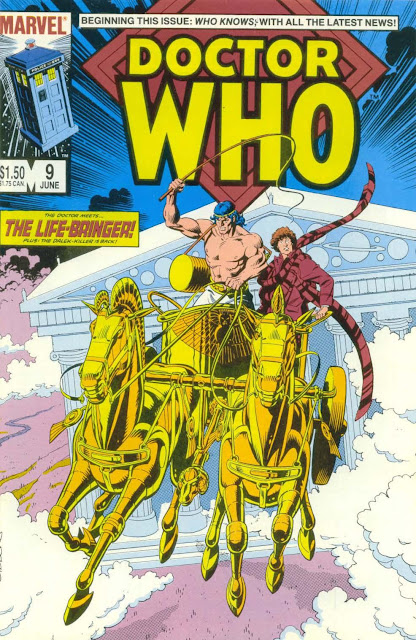 I remember seeing Doctor Who comics on the spinner racks in corner stores as a toddler and they looked powerfully lame. Look at this boring cover with its limited color palette. How could a frumpy white guy with an afro and a scarf compete with the likes of Teen Titans or X-Men?

But growing up means growing wise and sophisticated. Little did the stupid toddler with a mullet that I once was realize that some of the best stories Marvel Comics ever published were hidden behind these drab covers.

By the mid-80's Doctor Who had invaded American shores after 20 years as a British television staple. Marvel's UK division had produced a weekly, then monthly magazine dedicated to the Time Lord since 1980 and this mid-80s series reprints the best comics from the British magazine. This particular story involving Prometheus taking Doctor Who to the planet Olympus to meet the gods was originally published (in glorious black and white) in early 1981. 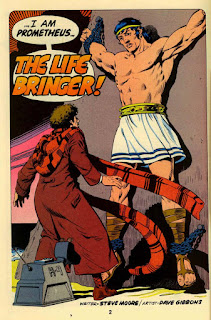 There was a surprising amount of writing and artistic talent floating around the U.K. working in relative obscurity at the time, many of whom would bust out in the much larger overseas market: Pat Mills and John Wagner, Jamie Delano, Steve Dillon, John Bolton, Dave Gibbons, Alan Moore, Alan Davis, Paul Neary, David Lloyd, Grant Morrison, Peter Milligan and on and on. One guy who never got his due across the pond was writer Steve Moore.

Today, he's probably best remembered as "Alan Moore's buddy (no relation)" but his writing skills have gone grossly under-appreciated. His stories weren't loud, rude or flashy but resembled great myths: labyrinthine moralistic tales in the long-standing tradition of John Bunyan. He's gone now and his original comics (his Father Shandor series in the legendary British magazine Warrior is one of my favorite comics ever) are incredibly difficult to come by but if you can track them down, rush to do so. This Doctor Who reprint series from the 80's is a good place to start as I'm sure you won't have trouble finding them in the back issue bins of your better comics retailer for dirt cheap.

This particular issue also contains a reprint of an earlier Moore-Dillon tale. 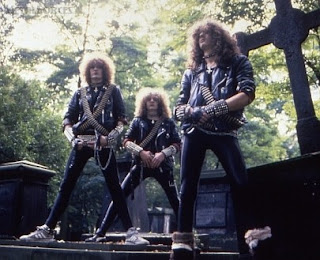 I'm no walking encyclopedia metallum but this is one of the best metal albums I've ever heard. It's got a little bit of everything you want in a mid-80's metal album: speed and thrash and a little darker something extra. But don't call them a black metal band, they don't like it. They were a good halfway point between Slayer and Celtic Frost, meaning they had speed at their disposal, but their ideas were a bit more varied and interesting. They could shred with the best of them and they favored a dark, heavy tone. They were one of the most complete bands of the era. The German trio continues to this day with two (of three) original members still in the fold (Mike on guitar and Schmier on bass). I highly recommend this album to any and all metal fans, but especially to those interested in the darker end of metal's early days. 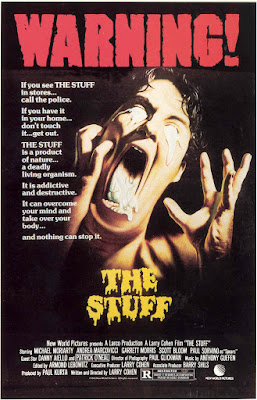 I only just found out about this movie in the last couple years on some "best obscure horror" list on one of those clickbait websites. It's not the best of movies but it has that 80's feel in abundance.

The Stuff is like a dry run for the much more popular The Blob, which would follow shortly. Ironically, The Stuff is the better of the two, it gives you all the dangerous goo and melting people you could possibly want with better writing and a superior cast. Just looking at the cast listed above it's hard to get a sense of what kind of movie it will be with that mish-mash, but for your information it has a fairly light tone considering some of the horrific dissolving and child endangerment scenes.

If you had to elevator pitch the film to your movie night galpals you might say it's like The Blob meets They Live and not be far off the mark. The Stuff is recommended for a "fun scares" kind of night, it will probably make your most squeamish friend cringe and cover her eyes while you down another handful of popcorn and grin with sick pleasure.

There is a version you can watch on youtube that's been split up into shorter parts.