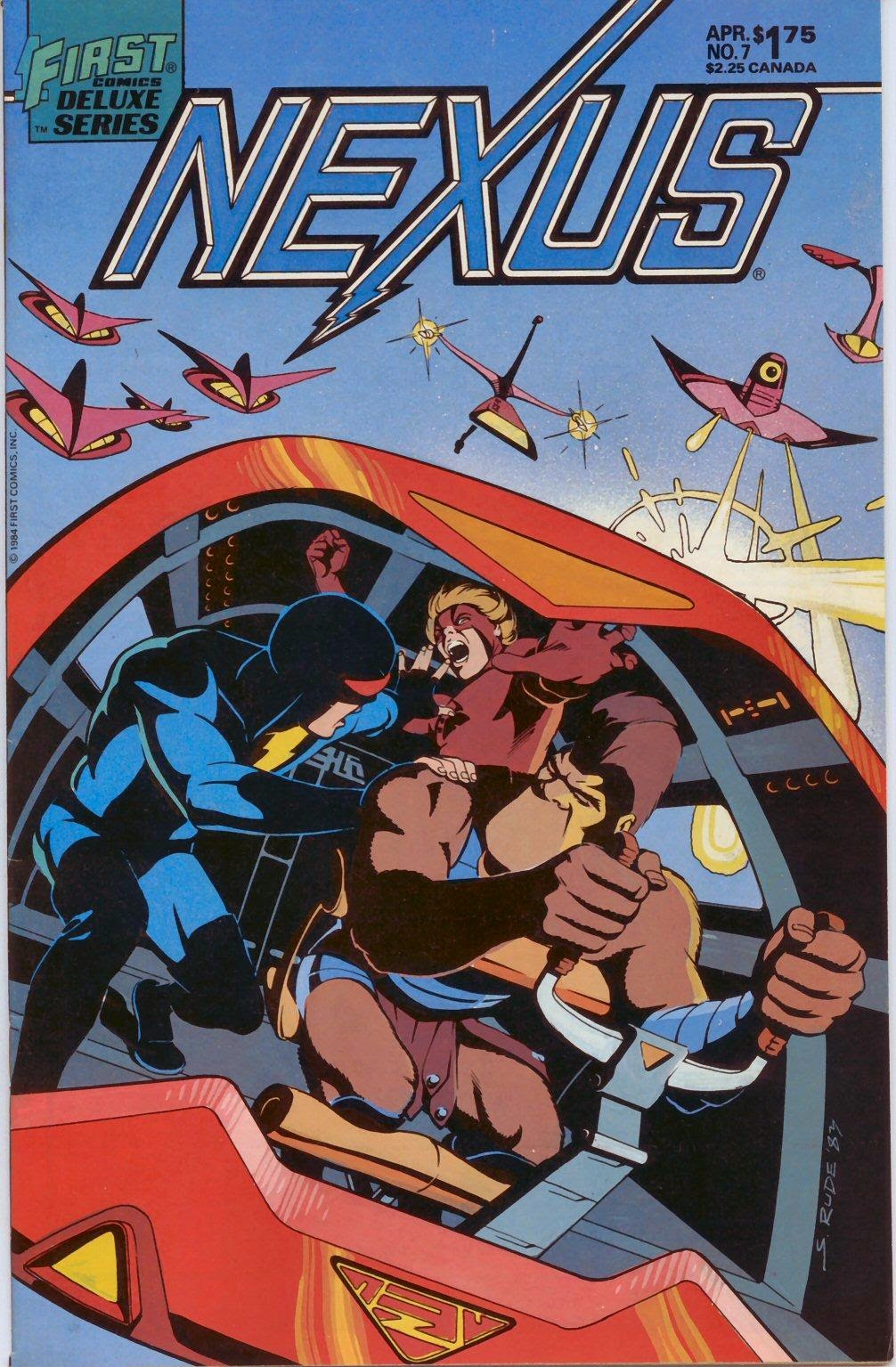 Mike Baron. Steve Rude. Nexus the intergalactic assassin and Badger the schizophrenic superhero. How, when and where does it get any better than this?

In 1984 Capital Comics, the original publishing home of Nexus and The Badger, retired its printing press, stranding both titles on the side of the proverbial road. But for the first time,

if there were ever a fortunate time for newer, independent creators with great ideas to look for a publisher, it was the mid-80's. Indy comics hadn't really been a thing before. There were numerous Comics Code Authority circumventing black & white comics magazines cropping up in the 1970's (Skywald, Heavy Metal to go along with the pre-existing Warren), but aside from former Marvel production manager Sol Brodsky's ill-fated Atlas / Seaboard, there wasn't much in the way of independent publishers of costumed adventure heroes until indie distributor Pacific Comics began publishing new material in 1981 and graphic novel specialty publisher Eclipse Comics joined the fray. First Comics was the third indie publisher to survive for more than a few months on comics specialty shop shelves, but with titles like American Flagg, Dreadstar, Jon Sable, Grimjack and the newly acquired Nexus and Badger, they may have been the best ever.

But the newly acquired properties got off to a bit of an awkward start. This was the first issue of Nexus to be published in a little over a year. Issue #6, the final one to be published by Capital was cover dated March 1984, though I'm sure buzz was high among those in the know about writer Mike Baron and artist Steve ("The Dude") Rude's Nexus joining a growing publisher, I'm equally sure that the momentum gained by universal critical acclaim was somewhat stifled in the meantime. The most awkward part of the transition between publishers was that this issue, #7 was the middle part of a three-part story teaming Baron's two signature characters, unlikely as the meeting would seem. Here's how they overcame those potential obstacles:

The issue starts with a four-page recap before diving into the adventure. The recap isn't something we see anymore, if we do see it in comics, it's usually rendered as text-only synopsis of previous issues on the inside front cover or title page. As somebody who only just caught the tail end of Marvel's heyday of creativity growing up, I loved the recap pages. It gave one an instant sense of familiarity with the world and the way things are supposed to look, it also gave the reader little bits of trivia and teased old villains and allies who you might have missed and who you might looking forward to reading about in future issues. Something was lost in the comics fan's experience when creators moved away from recap pages ... (LK Ultra steps down from soapbox, bracing himself with weary hand on creaking knee.) 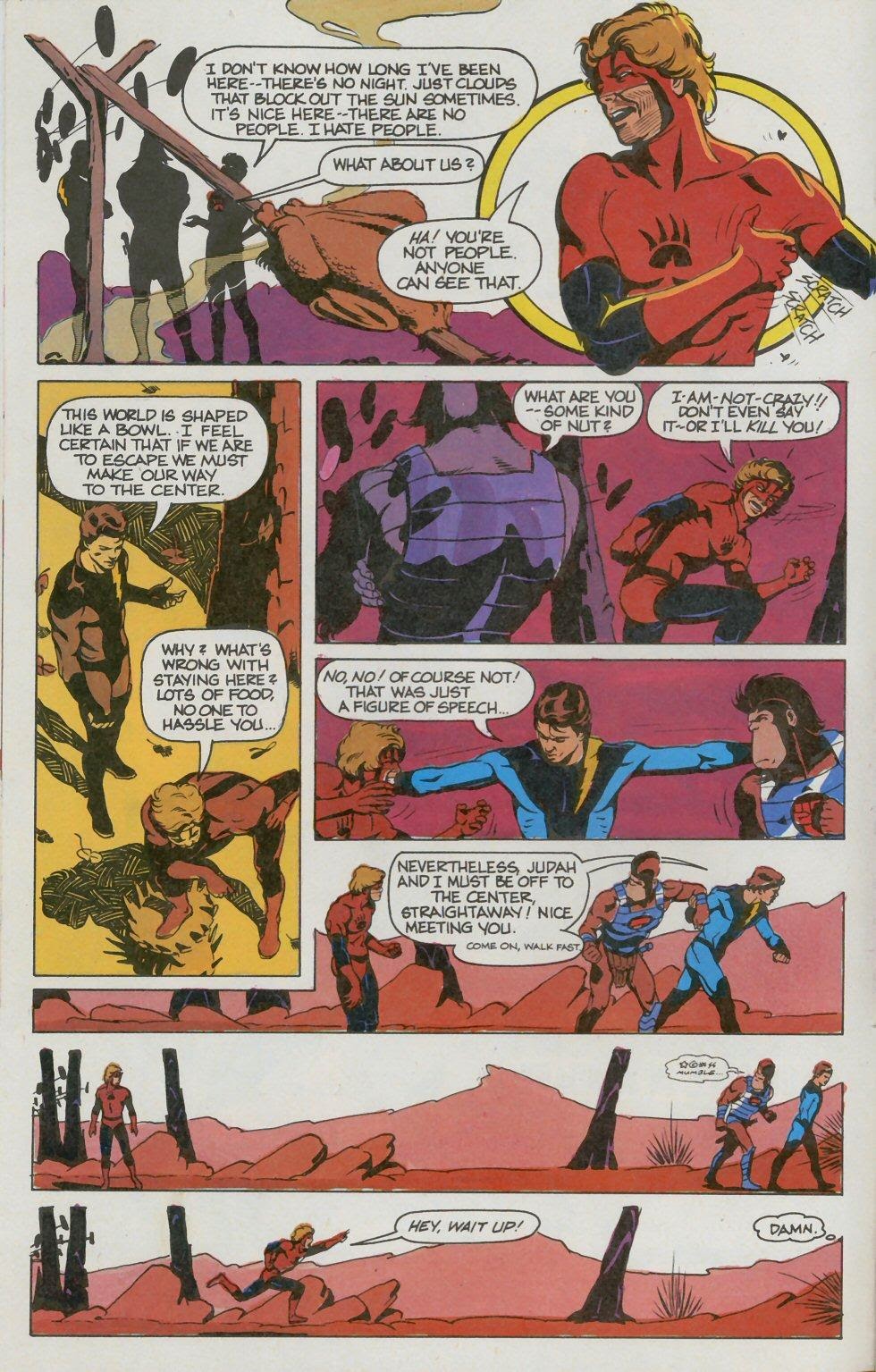 Anyway, as the story unfolds, Nexus and his ally Judah Maccabee have found themselves trapped on a bowl-shaped world with an annoying presence who keeps calling everybody "Larry" (and if you don't know what that means you really need to get some Badger in your brain). They are met by a telepathic, flying manta ray and a robot arms dealer with the personality of a used car-salesman.

It's explained to the trio along the way that to escape this strange planet, they need to cross three thresholds. It turns out each of the three heroes is uniquely suited to handle one of the three ordeals they must face. During the course of the story one page explains that it takes the trio 65 days to reach the threshold of the first barrier. "Their adventures would fill a book". The story has a classic Fairy Tale feel to it. Baron's writing is clear and direct and the themes are intrinsic to the characters, which is the way serial stories should be told. The issue is well structured, too. Immediately before we are told of the 65 day journey, the story cuts to the b-plot involving a Tor Johnson look-alike zombie awakening on Nexus's homeworld of Ylum (pronounced "eye-lum"). The main story isn't interrupted again for the rest of the issue, the b-plot finishes off the last four pages of the issue, leaving us with a cliffhanger.

It's refreshing to read logically structured stories. Today's distracted writer will ping-pong endlessly between multiple plots and subplots so that a 22-page story will have 12 different scenes, none of which are back to back from the main plot. I know, because I'm often guilty of this same kind of ADD-afflicted storytelling in my own scripts. 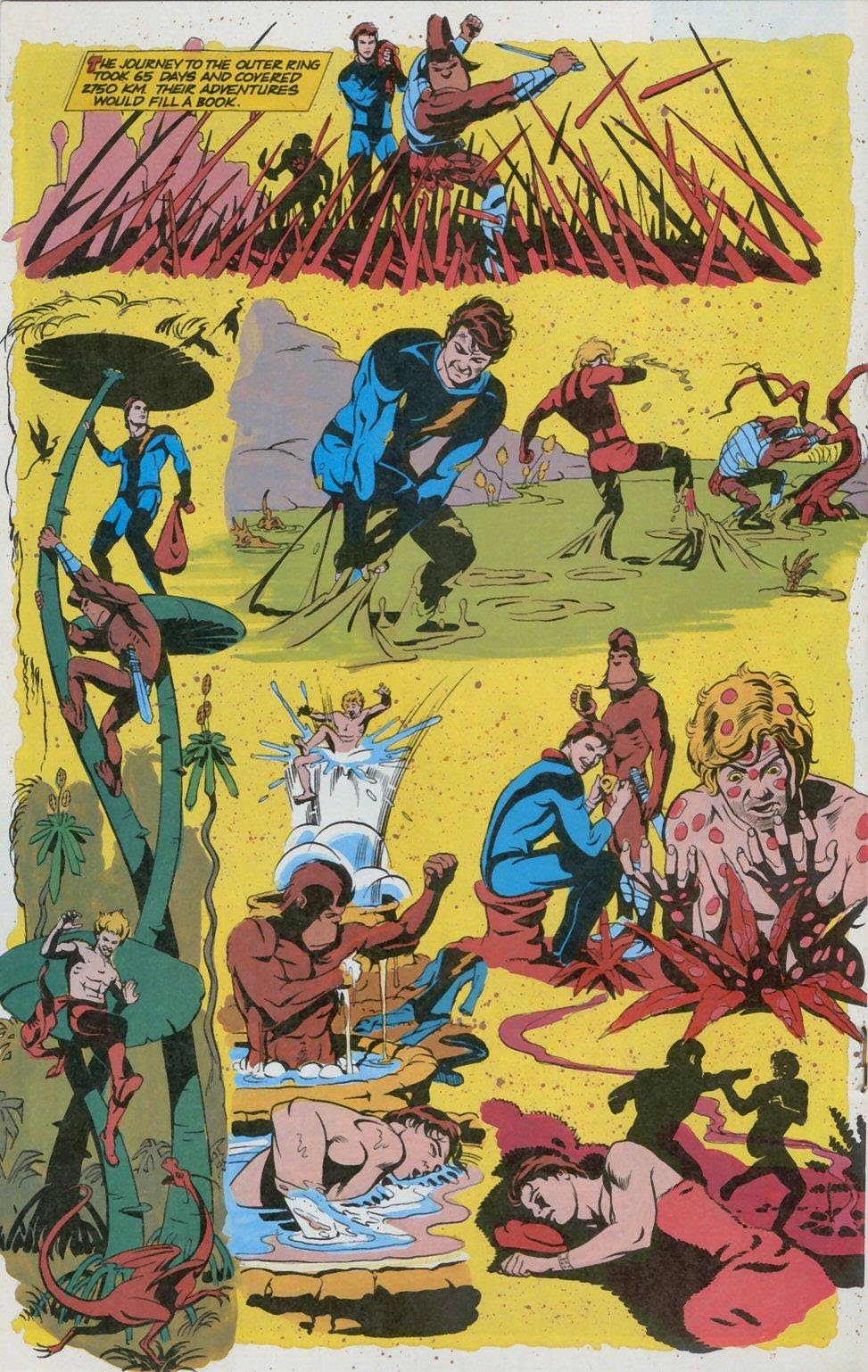 Nexus continues to this day, having recently been revived in the pages of Dark Horse Presents (Dark Horse Comics). The now classic character is still handled by the original storytellers, in fact Baron and The Dude are hard at work cooking up a new Nexus yarn even as I write this. To date there have been 102 issues released by four different publishers (the three listed above as well as Rude Dude Productions). Steve Rude remains one of the best artists in the long and beautiful history of comics art. Like many of the most brilliant comics artists (Jim Steranko, Paul Smith, Frank Brunner, Gray Morrow, Mike Ploog and Steve Lightle for starters), he doesn't have a prolific portfolio of comics work. He's primarily known as the Nexus artist, but he's done various one-off issues and mini-series for Marvel and DC Comics. Never enough for this greedy fan!

Baron is one of my favorite comics writers, though I discovered him late. When I was 10 years old or so I had an issue of Previews Magazine that I think Nexus was on the cover or maybe it was an inside advert, either way the image resonated with me. It was probably 15 years later that I actually checked Nexus out, but it was always there in the back of my mind to do so. When I did, I found out about The Badger as well, whom I actually remembered seeing on shelves but 10-year old me thought the character looked like a lame knock-off of Wolverine. Obviously, I was too young to appreciate satire. But, when I was in my pre-teens, one of the most popular characters in all of comics was The Punisher. I didn't like him because he wasn't colorful enough, his villains weren't "super" and I preferred characters who shot ray beams from their eyes rather than guns, but everybody else I knew or ever met later in life who had even a passing interest in comics during the early 90's loved the character. It turns out Mike Baron was the guy writing the bulk of those Punisher stories, and he's the one responsible for injecting biting humor into the mix, long before Garth Ennis. Baron also had long-remembered runs on The Flash and Star Wars: Rogue Squadron which will be the subject of a future Comics Suck! coming soon ...

WHAT ELSE WERE THE KIDS UP TO BACK THEN?
So, if the hepcats of the mid-80's were all about Nexus and The Dude, then what were they listening to? Only the greatest thrash metal album of the year ...

EXODUS-BONDED BY BLOOD
Most VH1 documentaries you'll watch on the subject of heavy metal cite 1986 as thee great year for metal's early days, but they're wrong. It's was a great year for music, but 1985 has it topped. Exodus isn't completely forgotten, but they're not one of the "big four" so they're not exactly well-remembered either. Their first three critically-acclaimed albums, 'Bonded by Blood' being the first, are classics of the subgenre and eventually landed them on a major label. In 1985 they were one of the pioneers of the bay area thrash metal scene, along with Testament and Metallica. Matter of fact, Metallica's lead guitarist Kirk Hammett was a founding member of Exodus. Geoff Andrews, an early member left to form pioneering death metal band Possessed. Hammett's guitar tech Gary Holt eventually joined the fledgling outfit and he's been the linchpin of the band ever since.

The release of the album met with repeated delays after it was recorded in the summer of '84. It's been surmised that had the album been released immediately after it was recorded, it might be considered the equal of Metallica's 'Killl 'em All' in terms of impact and influence. But regardless of the album's potential legacy it stands as a terrific album and an excellent example of the subgenre. The title track and "A Lesson in Violence" approach the brutality of early Slayer and rival any contemporary recordings by the big four in terms of sheer excellence and there isn't a significant drop-off in quality on the rest of the album.

'Bonded by Blood' stands as one of the best, most consistent albums of the 1980's. Also out in April of '85 was Manilla Road's 'Open the Gates' and 'Feel the Fire', the debut album from New Jersey thrash legends, Overkill. 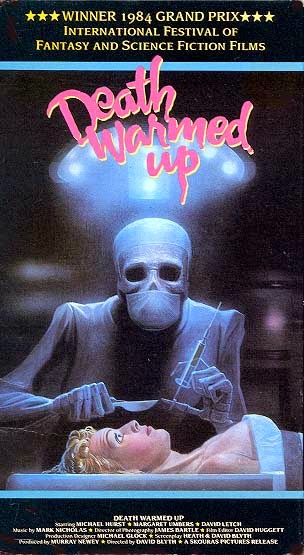 But the middle 80's wasn't just a boom time for heavy metal, it was also a watershed moment for horror films. By April '85, quality horror was being produced all across the world. Re-Animator is one of thee great horror films of the decade and is arguably the strongest of 1985, but Death Warmed Over (or alternately Death Warmed Up) featured the story of a mad scientist re-animating corpses and it was released as much as a year earlier than Re-Animator. But that's about the end of the similarities between the two pictures. Death Warmed Over doesn't feature nearly the same level of unforgettably characterization nor does it share inspiration from H.P. Lovecraft, but it shares similar moods with Running Man, Texas Chainsaw Massacre and even Peter Jackson's Braindead. It's a bit all over the place in tone. I ain't saying it's the worst ever, but I can only recommend this film to 80's horror fanatics looking to dig deeper into the decade's proverbial barrel without having to scrape bottom. But that said, it's available for any and all to viddie below.